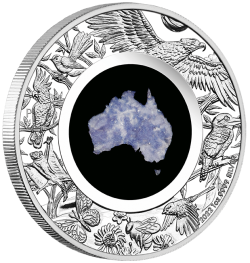 This beautiful coin features the great southern Australian continent in stunning Australian blue lepidolite. Since antiquity, European philosophers speculatedthat a large continent existed in the SouthernHemisphere to ‘balance’ those of the north.Terra Australiswas the Latin term they coinedto describe the posited great south land which different navigators explored in parts until Royal Navy cartographer Matthew Flinders completed the first circum navigation of the island-continent now known as Australia in 1803.Europeans were astonished by the exotic wildlifethey encountered.Familiar to First Nations peoplefor at least 60,000 years, they included the isolated continent’s famous pouched marsupialsand an extraordinary diversity of fascinating bird sand insects. Today, Australia supports about 850bird species, of which roughly 45% are foundnowhere else on Earth, while it is estimated thatthere are hundreds of thousands of insects –withmany still waiting to be formally identified.

Struck by The Perth Mint from 1oz of 99.99% pure silver in proof quality, the coin is issued as legal tender under the Australian Currency Act 1965.The Perth Mint will release no more than 5,000 of the Great Southern Land 20221oz Silver Blue Lepidolite Coin.

The coin's reverse features a blue lepidoliteinsert in the shape of the Australian continent. It is encircledwith representationsofan Australian wedge-tailed eagle;a kookaburra; a splendid fairy wren; a bluebanded bee; a birdwing butterfly; a sugar glider;a sulphur crested cockatoo; and a willie wagtail. The background is composed of native flora motifs. Included on the reverse is the coin’s weight, purity and year-date together with The Perth Mint’s ‘P’ mintmark. The obverse bearsthe Jody Clark effigy of Her Majesty Queen Elizabeth II and thecoin’smonetary denomination.