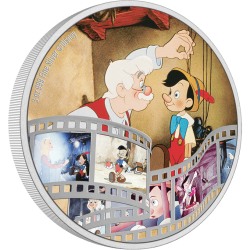 The 1940 Disney cinema masterpiece Pinocchio is immortalised on this large 3oz pure silver coin! The film had its world premiere in New York on 7 February 1940 and has been described as the most beautifully realised and technically perfect of all the Disney animated movies. The coin features a coloured image of Pinocchio and Geppetto along with a montage of stills from the movie on an engraved silver film roll.

Each coin is placed in a high-quality box, which features a delightful image of Pinocchio with Jiminy Cricket. Once open, the coin pops out of the black velvet encasing it. The Certificate of Authenticity can be found on the back of the box, which confirms the coin as legal tender. Therefore, it also has a mintage - which in this case has been set at just 2,000 coins. You will be the envy of all Disney fans if you get one! The box also shows the coin’s unique number in the mintage.

This magnificent coin would also make a wonderful gift for any Disney fan. But with stocks limited, don’t wait too long to order!