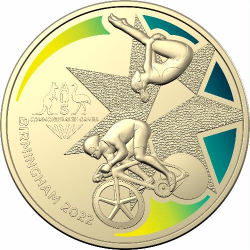 • Packaged in a presentation card

Australia’s finest athletes and para-athletes will proudly compete in the Commonwealth Games, to be held in Birmingham, England from 28 July to 8 August 2022.
To mark the Birmingham 2022 Commonwealth Games and support Australia’s athletes, the Royal Australian Mint is releasing an attractive commemorative 2022 $1 Coloured Uncirculated Coin.