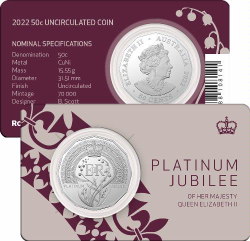 In 2022, Her Majesty Queen Elizabeth II celebrates her Platinum Jubilee with seventy years on the throne. In keeping with tradition, the Royal Australian Mint will mark this significant milestone with the release of a beautiful 50c coin design in both fine silver proof and uncirculated finishes.

On 6 February 1952 King George VI died and his eldest daughter, twenty-five year old Princess Elizabeth succeeded to the throne. From this moment on she became Her Majesty Queen Elizabeth II and her reign has been both long and monumental.

Her Majesty Queen Elizabeth II is the oldest and longest-serving monarch in Great Britain’s history. She is also the world’s longest-reigning queen, oldest living monarch, and longest-reigning current monarch. During Her seventy years on the throne, Her Majesty has seen fifteen Australian Prime Ministers, fourteen British Prime Ministers and thirteen United States Presidents.

Her seven decades of service is a monumental achievement, deserving of commemoration and celebration.

• The cypher is framed with lily of the valley, one of Her Majesty’s favourite flowers and golden wattle, Australia’s national floral emblem.

• The design is finished with seventy St Edward’s Crowns fanning out, one for each year of Her Majesty’s reign.

• Available in both uncirculated and fine silver proof finish