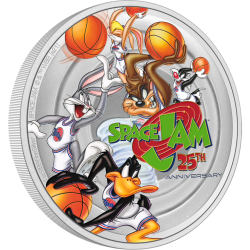 Celebrate the 25th anniversary of Space Jam, which premiered on 15 November 1996, with this officially licensed collectible coin.

Made from 1oz pure silver, the coin shows five of the Tune Squad, ball in hand, surrounding the Space Jam25th Anniversary logo. The five are Bugs Bunny, Lola Bunny, Daffy Duck, Sylvester and the Tasmanian Devil. These coloured characters are set against an engraved and frosted silver background – which you may recognise as being part of the Looney Tunes logo! The obverse has also been cleverly designed to resemble a basketball while including the Ian Rank-Broadley effigy of Her Majesty Queen Elizabeth II to confirm it as legal tender.

The themed box is covered with more images from the movie and the official anniversary logo. The Certificate of Authenticity is on the back with the coin’s unique number in the mintage. Opening the flap at the top you can remove the acrylic block containing the coin and use this for display. Or just leave it in the box and view it through the large window!

The limited worldwide mintage of 1996 coins reflects the year the film premiered. Get in the game and commemorate this 25th anniversary today!