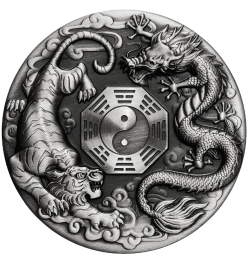 Revered in Chinese traditional culture, the dragon and tiger are often portrayed together as expressions of yin and yang, the ancient belief that all things in the universe consist of two opposing yet complementary forces.

The serpent-like Chinese dragon is regarded as a divine mythical creature embodying power, wealth and good fortune. With a pattern on its forehead resembling the Chinese character for ‘king’, the tiger is also regarded as an auspicious animal representing bravery, strength and ambition.

According to the ancient philosophy, these wildly different spirits are fierce rivals. When seen together, however, the yin tiger and the yang dragon symbolise harmony achieved through the balance of opposing forces.

The coin’s reverse depicts a dragon and tiger encircling an image of a bagua, a motif incorporating eight Taoist trigrams representing the yin and yang present in all things. It also includes a taijitu, a black and white symbol that denotes the interdependence of yin and yang energy.

The Ian Rank-Broadley effigy of Her Majesty Queen Elizabeth II appears on the coin’s obverse, which also includes its weight, fineness, monetary denomination and 2021 year-date.

No more than 888 of the Dragon and Tiger with Bagua 2021 2oz Silver Antiqued Coin will be released.