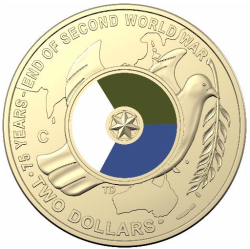 On 2 September 1945 the Second World War ended. Around a million Australian men and women served in the war, with nearly 40,000 losing their lives in the conflict. The Royal Australian Mint commemorates the 75th anniversary of the end of the war with this 2020 $2 C mint mark coloured coin, featuring the dove of peace and colours representing the three Australian forces that served from 1939 to 1945.