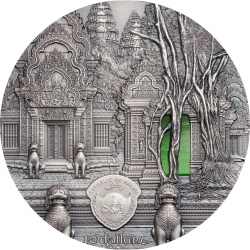 Tiffany Art is a Berlin World Money Fair classic since 2004, eagerly anticipated by fans and collectors worldwide. However, there is a time for every series to find an end and for collectors to complete their collections. CIT’s most awarded coin series is set to have its final issue released in 2020.

Until then the penultimate issue will surely fascinate with an intricately detailed design, for which the series is well known. The 2019 issue presents the Cambodian Khmer architecture of Angkor. The temples, which are slowly being reclaimed by nature feature a more organic and less geometric design than many of the western issues of the past. Aerial jungle roots drape of the Tiffany glass to illustrate this fascinating process.