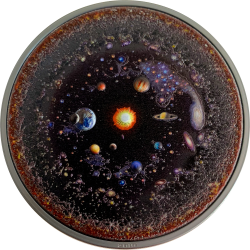 The Universe is the first release in a stunning "Space; the final frontier" series. Minted on a 65mm 3oz black proof blank showing the full observable universe. Artist's logarithmic scale conception of the observable universe with the Solar System at the center, galaxies, cosmic web and the Big Bang's invisible plasma on the edge.