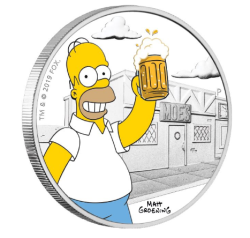 First introduced in 1987, the Simpson family originally appeared in 30-second segments on The Tracey Ullman Show. Two years later, The Simpsons premiered as a half-hour series and instantly became a worldwide pop-culture phenomenon, now seen in 60 countries in 20 languages.

In 2018, The Simpsons reached an incredible milestone becoming the longest-running primetime scripted show in television history.

This 1oz pure silver coin features a coloured image of Homer Simpson raising a glass in front of Moe’s tavern. Included in the design is Matt Groening’s signature and The Perth Mint’s ‘P’ mintmark. The coin’s obverse depicts the Ian Rank-Broadley effigy of Her Majesty Queen Elizabeth II, the monetary denomination, the weight and fineness, and the 2019 year-date.

The coin is presented in a clear acrylic case, allowing both sides of the coin to be displayed, and is packaged within a themed shipper. The coin is accompanied by a numbered Certificate of Authenticity.