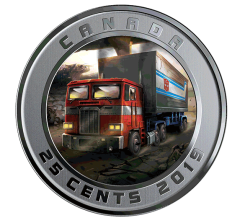 Watch OPTIMUS PRIME go from robot to vehicle mode! And the packaging changes too!

He is the voice of reason, compassion and courage—a superhero in robot form. As the charismatic leader of the AUTOBOTS, OPTIMUS PRIME is dedicated to doing what’s right while protecting all sentient beings. In fact, his belief in freedom and justice never wavers, even as he battles the villainous DECEPTICONS and his arch-nemesis, MEGATRON. Packaged in a card that changes into an easel, your coin is one of our most affordable pieces. This TRANSFORMERS collectible shows OPTIMUS PRIME in action: just tilt the coin from side to side, and you’ll see the AUTOBOT leader instantly switch from robot to a ROBOTS IN DISGUISE mode.

Ideally priced as a gift for a TRANSFORMER fan and as an starter piece for a would-be coin collector! Order today!

The reverse design features lenticular technology, which seamlessly fuses two colourful images of the iconic TRANSFORMERS character, OPTIMUS PRIME. In the first image, the leader of the AUTOBOTS is shown in robot mode against a fiery backdrop. In the second image, OPTIMUS PRIME has assumed a vehicle form. The obverse features the effigy of Her Majesty Queen Elizabeth II by Susanna Blunt.

Your coin comes in a presentation card that features colourful concept art and a special backing—just pop out the inserts and the whole thing transforms into an easel for an instant display!

TRANSFORMERS and all related characters are trademarks of Hasbro and are used with permission. © 2019 Hasbro. All Rights Reserved. Licensed by Hasbro.