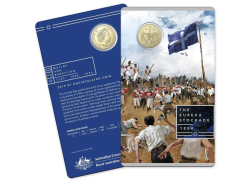 The Royal Australian Mint has released this coin to commemorate the dramatic Eureka uprising of miners at Ballarat, Victoria, in 1854. This clash between struggling miners and the government led to the defeat of the miners, but also brought their plight to the attention of the people and led to more egalitarian representation of the people in Australia’s government.

Part of the Mutiny and Rebellion series.