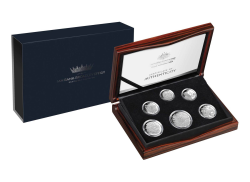 The 2019 Fine Silver Proof Six Coin Set is the last produced by the Royal Australian Mint to bear the Ian Rank-Broadley effigy of Her Majesty Queen Elizabeth II. When the effigy was released in 1998, it was notable for its naturalistic portraiture. It was the fifth effigy of the Queen to appear on Australian coins. This stunning six coin set marks the end of an era in Australian numismatics.