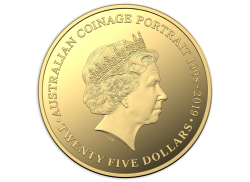 The tradition of placing an effigy of the reigning monarch on the obverse of coins dates back centuries. The year 2019 marks the transition to the sixth effigy of Her Majesty Queen Elizabeth II to appear on Australia’s coins.
This 2019 $25 Gold Proof Coin features the new Jody Clark effigy on the obverse, and on the reverse, the familiar effigy by Ian Rank-Broadley, finished to the Mint’s world-class proof standard.