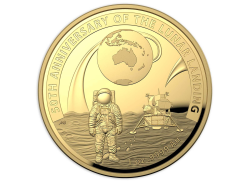 The Apollo 11 lunar landing of July 1969 was watched by an estimated 600 million viewers. Unknown to most, the first television images of humans walking on the Moon were received by two Australian radio antennas. The 50th anniversary of this historic achievement is celebrated in this exquisite gold domed coin, honouring Apollo 11 as well as Australia’s important contribution to the mission.