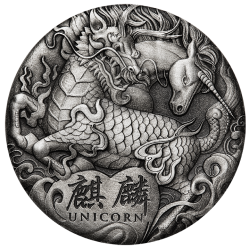 to coincide with the imminent birth or death of a great leader.

(female) - and it was therefore considered to signify yin-yang harmony.

as the ‘the Chinese unicorn’. It was often depicted surrounded by fire while also

reputed to be able to walk on water.

While the qi lin may look terrifying, it had such a benevolent nature that it never

Similarly, the horse-like unicorn, with a single horn projecting from its forehead,

has been portrayed since antiquity including the Indus Valley Civilization more

Derived from the Latin terms uni (single) and cornus (horn), the unicorn was

illustrated in Celtic, Medieval and Renaissance European art as a creature of

purity and grace. In modern times the fabled creatures are believed by some to

Western folklore are unclear, each lives on in contemporary visual arts,

literature and popular culture. The unicorn also represents Scotland in the

surrounded by a stylised representation of fire and water, and a unicorn. The

The Ian Rank-Broadley effigy of Her Majesty Queen Elizabeth II, the monetary

denomination, and the 2018 year-date are shown on the coin’s obverse.

the surface abrasions of an ancient artefact. As a result of this treatment, the

appearance of each coin may vary.