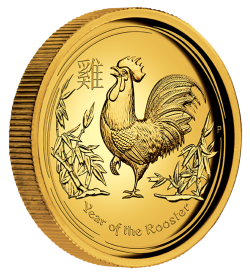 Only Direct Deposit will be accepted for this coin. Please contact us to order. Thanks.

This spectacular gold coin celebrates the Year of the Rooster, the tenth animal in the 12-year cycle of the Chinese zodiac.

Struck by The Perth Mint from 1oz of 99.99% pure gold in proof quality, the coin is issued as legal tender under the Australian Currency Act 1965.

The Perth Mint will release no more than 388 of the 2017 Year of the Rooster 1oz Gold Proof High Relief Coin.

The reverse of the coin depicts a rooster standing in a stylised Chinese scene featuring bamboo and leaves. The Chinese character for ‘rooster’ and the inscription ‘Year of the Rooster’ also appear in the design with The Perth Mint’s traditional ‘P’ mintmark.

The Ian Rank-Broadley effigy of Her Majesty Queen Elizabeth II, the 2017 year-date, and the monetary denomination are shown on the coin’s obverse.