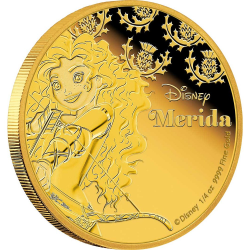 The ninth Disney Princess release features the strong and independent Princess Merida, the leading character from the animated Disney film, Brave, released in 2012.

Each coin is meticulously struck from 1/4oz of 99.99% pure gold in proof quality.

The reverse of the coin features an image of Merida, surrounded by relief engraved thistles. The design also includes the inscription Disney Merida.

Issued by New Zealand Mint as legal tender under the Pacific island of Niue, the obverse of the coin features the Ian Rank-Broadley effigy of Her Majesty Queen Elizabeth II, the monetary denomination, and the 2016 year-date.

Each coin is presented in a special wooden display case and beautifully illustrated shipper, and accompanied by a numbered Certificate of Authenticity