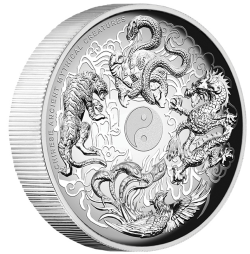 The Perth Mint will release no more than 5,000 of the Chinese Ancient Mythical