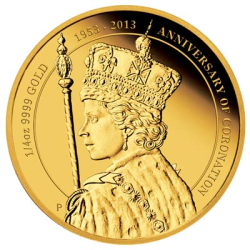 Her Majesty ascended the throne on 6 February 1952 and was crowned Queen Elizabeth II on 2 June 1953 at the tender age of 27.  An estimated three million people lined the streets of London to catch a glimpse of the procession, while millions more crowded around newly-purchased television sets to watch the investiture of Britain's youngest Sovereign since Queen Victoria.  For many, the Coronation represented the beginning of a hopeful new Elizabethan era.

The coin’s reverse features a struck impression of Her Majesty Queen Elizabeth II in ceremonial regalia, captured by Sir Cecil Beaton, bordered by the inscriptions 1953-2013 ANNIVERSARY OF CORONATION.