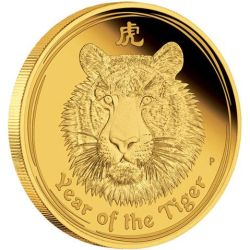 The reverse of each coin depicts a tiger’s head.  As well as the inscription ‘Year of the Tiger’ and the Chinese character for ‘tiger’, the design also incorporates The Perth Mint’s ‘P’ mintmark.