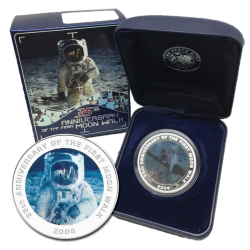 On 20 July 1969 (21st July in Australia), Neil Armstrong descended from the Eagle lunar module, taking 'one small step for man, one giant leap for mankind'. Shortly afterwards, he was joined by mission colleague Buzz Aldrin and together the two astronauts completed their historic moon walk. Australia's radio telescope at Parkes Observatory, NSW, relayed television pictures of their walk to the rest of the world.

This reverse design of the coin celebrates the 35th anniversary of that momentus event showing three different coloured images which morph from one to another as the viewing angle is changed. The process used to create the stunning effect is known as 'Dynamic Imaging' and this is the first coin to use the process. The three NASA images depict the Apollo 11 Saturn Five space rocket, astronaut Buzz Aldrin's space suit and helmet and the deployment of the United States flag on the surface of the moon by Armstrong and Aldrin.

The coin is housed, encapsulated, in a blue, hinged-lid presentation case protected by a colourful cardboard outer box and accompanied by a numbered certificate of authenticity.