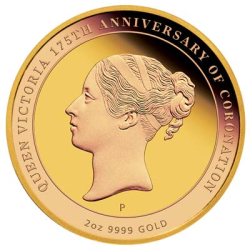 On 20 June 1837, following the death of King William IV, his niece, Princess Victoria became Queen at the tender age of 18.  Her Coronation was held at Westminster Abbey a year later on 28 June 1838.  The Coronation was a significant occasion in British Royal history, with more than 400,000 people pouring into London to see the new Queen being crowned.

Queen Victoria was the figurehead of a vast Empire expanding from the United Kingdom to Australia, Canada, New Zealand, Africa and India.