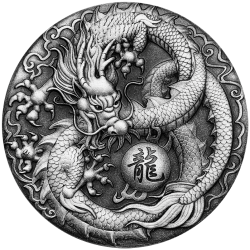 In Chinese culture, the dragon is revered as a divine mythical creature, a symbol of power, strength, wealth, and good fortune and it is often portrayed chasing a luminous or flaming pearl.

The flaming pearl is viewed as a metaphor for wisdom, enlightenment and spiritual essence. It is also said to rid a person of their troubles, bringing career success as well as fortune and good health.

From an artistic perspective, dragons are frequently depicted in pursuit of the flaming pearl, which is represented as swirling through mist, smoke and shadows. The dragons are traditionally shown with their mouths open and their eyes wide, as they endeavour to catch the prized treasure.

The reverse of the coin features a dragon chasing a flaming pearl inscribed with the Chinese character for ‘dragon’.

The coin’s obverse depicts the Ian Rank-Broadley effigy of Her Majesty Queen Elizabeth II, the 2017 year-date, and the monetary denomination.