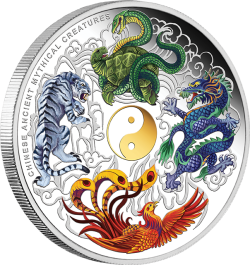 The coin’s reverse portrays the four Chinese ancient mythical creatures in vibrant colour, with the yingyang symbol gilded in 24-carat gold in the centre of the coin. The design includes the inscription CHINESE ANCIENT MYTHICAL CREATURES.

The coin’s obverse depicts the Ian Rank-Broadley effigy of Her Majesty Queen Elizabeth II, the 2014 year- date, and the monetary denomination.

The Perth Mint will release no more than 1,000 of the Chinese Ancient Mythical Creatures 2014 5oz Silver Proof Coloured Coin.