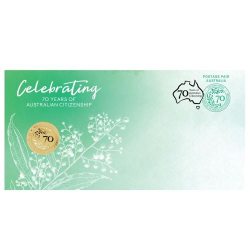 In 2019, Australia marks 70 years since citizenship was recognised by law. The first Australian citizenship ceremony was held in 1949 with seven participants. Today, thousands of people take the ‘Pledge of Commitment’ each year, promising to uphold values of equal opportunity, mutual respect and tolerance, freedom of speech and religion, and commitment to democracy and Australian law.

This coin and card set celebrates the shared common bond of citizenship which unites all Australians while respecting and welcoming diversity. Australia’s national flower, the golden wattle, is featured on the coin and delicately coloured card, making it a beautiful and unique gift to commemorate Australian citizens new and old.

The coin’s reverse design depicts the Australian golden wattle, the national flower which has grown on the Australian continent for 35 million years. The design also incorporates the words ‘CELEBRATING 70 YEARS OF AUSTRALIAN CITIZENSHIP’ and The Perth Mint’s traditional ‘P’ mintmark.