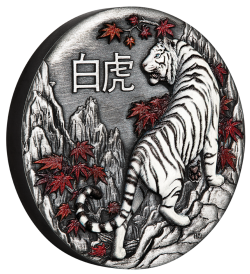 In the ancient Five Elements theory, wood, fire, earth, metal and water were considered to be basic constituents of everything in the universe. Among other aspects of nature, metal denoted the direction West and was represented by the colour white. Thus, the White Tiger became a mythological guardian of the West.

The coin's reverse features a magnificent white tiger climbing among mountainous peaks. The design includes representations of Asian Maple trees with red coloured leaves, signifying autumn, the season associated with metal. Also incorporated in the design are the Chinese characters for 'white tiger'.