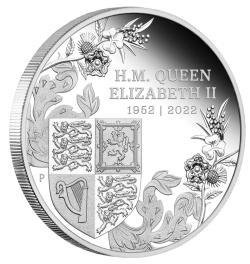 Crowned on 2 June 1953, the Queen’s reign has been nothing short of remarkable. Admired as a symbol of strength and stability and beloved by people around the globe, she became the longest-reigning monarch in British history on 9 September 2015. On 6 February 2022 she became the first British monarch to celebrate 70 years on the throne.

The coin’s reverse portrays the Shield of the Royal Coat of Arms featuring three lions passant, a harp, and a lion rampant – ancient heraldic symbols of England, Ireland and Scotland. A figurative flower stem combines stylised representations of an English rose, Irish shamrock and Scottish thistle, together with Australian wattle.

Also included in the design is the inscription ‘H.M. QUEEN ELIZABETH II 1952 | 2022’, The Perth Mint’s ‘P’ mintmark, and an artistic interpretation of the mantle from the Royal Arms – originally a linen cover on the back of a medieval knights helmet.

The coin is housed in a classic display case with a wooden lid. Packaged within an illustrated shipper, each coin is accompanied by a numbered Certificate of Authenticity.