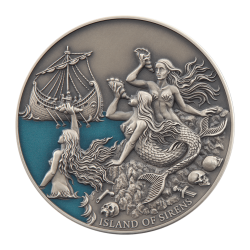 The reverse of the newest aged silver collectible coin depicts charming yet treacherous sirens. Homer’s epic poem ‘Odyssey’ mentions two sirens whose names are not known, and the third siren is mentioned only in later works by other authors. These mythical creatures used to spend time on the rocky edge of their island which was covered in the bones of the dead – a symbol of what a siren’s song could do.

Before the sailors even approached the island where the sirens lived, they could hear the haunting voices from afar. The song of the sirens was impossible to resist – it lured sailors to the rocky shore where their ships would crash, and the men on board would perish.

The limited-edition collectible silver coin ‘Sirens’ can be not only a great addition to one’s collection, but also an original gift for people who love travelling or are interested in legends and myths. The latest minting technologies as well as high relief and digital printing have been applied in the production of the coin. The obverse of the coin is divided into four sections which depict all the coins of the ‘Mythical Creatures’ series: ‘Labyrinth of the Minotaur’, ‘Sirens’, ‘The Nest of the Harpies’, and ‘Sea Monster Kraken’. These mythical creatures are often found in Greek mythology.