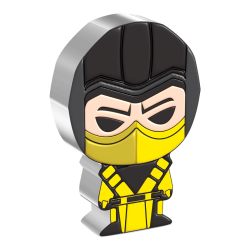 Made from 1oz of pure silver, this Chibi® Coin features the deadly resurrected ninja, Scorpion. The coin has been shaped and coloured to resemble the early version of Scorpion. As a Chibi art version, the focus is on his distinctive yellow tunic and mask, with contrasting black headgear. The Ian Rank Broadley effigy of Her Majesty Queen Elizabeth II can be found on the opposite side to confirm it as a legal tender coin.

The coin is protected by an acrylic capsule, inside a specially designed box with a window for display. This box features an image of Scorpion as he appeared in the original game on the back, as well as all seven original characters on both sides.

There is a limited mintage of only 2,000, which is confirmed on the box along with a Certificate of Authenticity and the coin’s unique serial number.

This may ultimately be the most sought-after Chibi® Coin for those who grew up playing Mortal Kombat, make sure you fight for yours!