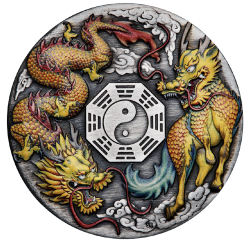 The dragon and qilin are mythological creatures that have been embraced in Chinese culture for thousands of years.

The dragon is a serpentine-shaped beast with the scales of a fish, eagle-like talons and a horned head with demonic eyes. Despite its fearsome appearance, the dragon is a potent symbol of abundance and good fortune, considered to have control of water and weather, and thus the prospect of a successful harvest. Revered as the embodiment of the Emperor and a symbol of imperial authority, wise dragons are popularly believed to offer humanity enlightened guidance and protection.

The qilin is a gentle horse-shaped creature with a scaly body and dragon-like head. Although usually portrayed with antlers, it is sometimes compared to a unicorn owing to its reclusive and solitary life. Visible only to chosen ones, the qilin is said to appear during the reign of an esteemed ruler or when an eminent sage, such as Confucius, is born or dies. Considered a harbinger of happiness, peace and stability, it’s also a popular amulet understood to attract good luck, protection and successful children.

The coin’s artistry depicts a dragon and a qilin in colour, with stylized clouds in the background. The legendary creatures surround a bagua, a motif incorporating eight Taoist trigrams representing the yin and yang present in all things. It also includes a taijitu, a black and white symbol that denotes the interdependence of yin and yang energy.

The Ian Rank-Broadley effigy of Her Majesty Queen Elizabeth II is portrayed on the coin’s obverse, which also includes its purity, weight, denomination and 2022 year-date.