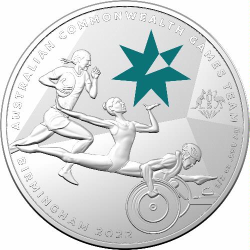 • Presented in a presentation case

Australia’s finest athletes and para-athletes will proudly compete in the 22nd Commonwealth Games, to be staged in Birmingham, England from 28 July to 8 August 2022. To mark the Birmingham 2022 Commonwealth Games and support Australia’s athletes, the Royal Australian Mint is releasing a commemorative 2022 $1 Coloured 1/2oz Silver Uncirculated Coin.

Every four years, some of the world’s finest athletes compete in the Commonwealth Games, created to foster friendly sporting competition among British Empire nations and first staged in Canada in 1930. Only twice have the games not been held, during and immediately after World War 2.
There are 54 Commonwealth nations but territories also participate, making 72 teams.
Australia is one of six nations to have participated in every Commonwealth Games. Australian athletes have always performed well, topping the medal tally at 13 of the 21 games.
Nine nations have hosted Commonwealth Games. Australia has hosted the most – in Sydney (1938), Perth (1962), Brisbane (1982),
Melbourne (2006) and Gold Coast (2018).
Where once para-athletes competed separately, they are now fully integrated into the Commonwealth Games, with their events staged as part of the program and their medals counting towards a nation’s medal tally.