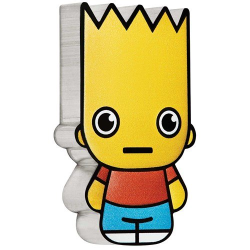 Introducing a charming new way to celebrate The Simpsons, this character-shaped coin portrays a stylised representation of one of its most popular characters. Made from 1oz of pure silver, the official licensed product is the first of a series of exceptionally limited Minted Mini Collectables sure to delight fans around the world.

The Simpsons premiered as a half hour-series in 1989 and instantly became a worldwide pop-culture phenomenon, now seen across 200 countries in 27 languages. In 2018, The Simpsonsreached an incredible milestone becoming the longest-running primetime scripted show in television history.

An official licensed product, the character-shaped coin portrays a stylised representation of Bart Simpson in colour.

Accompanied by a numbered certificate of authenticity, the coin is housed in a clear acrylic case, which allows both sides of the coin to be displayed, as well as a themed shipper.