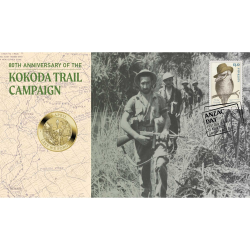 This stamp and coin cover recognises Australia's most revered national occasion – Anzac Day. Commemorated every 25 April on the anniversary of the first Gallipoli landing, it is a time when the nation pauses to remember the sacrifices of all our servicemen and women.

The 2022 Anzac Day Stamp and Coin Cover marks the 80th anniversary of the Kokoda Trail campaign of World War II – a series of fierce engagements between Japanese and Allied forces in the then Australian Territory of Papua.

The coin portrays Australian troops climbing the steep mountainous Kokoda Trail. Included in the design is a stylised motif representing a flaming torch, as well as the inscriptions ‘25 APRIL’, ‘LEST WE FORGET’ and The Perth Mint’s ‘P’ mintmark.