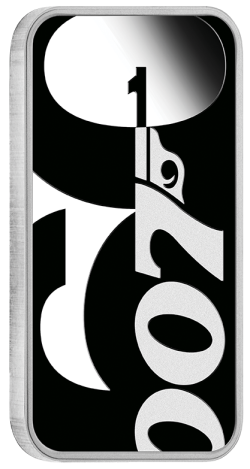 We are excited to present this officially licensed James Bond 1oz Silver Rectangular Coin which celebrates the 60 Years of Bond movies. James Bond is a fictional British Secret Service agent created by former intelligence officer and author Ian Fleming in1953. His famous character featured in 12 novels and two short story collections before producers Albert R. ‘Cubby’ Broccoli and Harry Saltzman brought Bond to cinema screens for the first time in 1962. During EON Productions’ 25 Bond block busters to date, the spy has been memorably portrayed by six actors -Sean Connery, George Lazenby, Roger Moore, Timothy Dalton, Pierce Brosnan and Daniel Craig, who each brought their own unique flair to the role. Now, 60 years after the premiere of Dr. No, James Bond continues to entertain and excite audiences around the world in one of film’s longest running and most successful franchises.

Struck by The Perth Mint from 1oz of 99.99% pure silverin proof quality, this coin is issued as legal tender under the authority of the Government of Tuvalu.The Perth Mint will release no more than 5,000of the 60 Years of Bond 2022 1ozSilverProof Coloured Rectangular Coin.

The coin’s reverse portrays a partial representation of the official 60thanniversary logo ’60 YEARS OF BOND’, which incorporates the iconic 007 gun logo.The obverse of the coin bears the IanRank-Broadley effigy of Her Majesty Queen Elizabeth II,the 2022year-date, weight and purity, and monetary denomination.