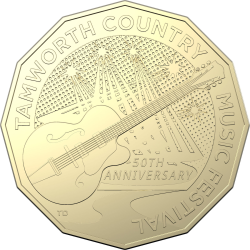 In 1973, Tamworth hosted the inaugural Country Music Festival, now Australia’s largest music festival, held over ten days each January. As a country music event, Tamworth ranks second only to the world’s biggest at Nashville, Tennessee, which was first staged in 1972. The Tamworth festival will mark its 50th anniversary in 2022, and is celebrated in this exceptional 2022 50c Uncirculated Coin.