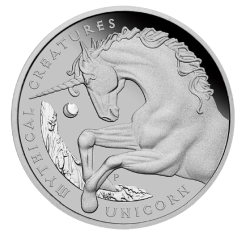 Portrayed as a white horse with a single, spiraling horn on its forehead, the unicorn is believed to pass between worlds and is impossible to catch. Its most notable feature became a topic of special interest – those drinking from its horn, it was said, would be immune to disease and poison.

In secular folklore the unicorn became emblematic of purity, morality and chaste love, and from the 15th century was widely used in heraldry. New levels of interest are reflected in modern pop culture. A symbol of magic and miracles, unicorns are universally regarded as beautiful and mysterious, while representing innocence, happiness and hope.

The Mythical Creatures Unicorn 2021 1oz Platinum Proof Coin is struck by The Perth Mint from 99.99% pure platinum and issued as legal tender under the Australian Currency Act 1965. No more than 125 of these coins will be released worldwide.