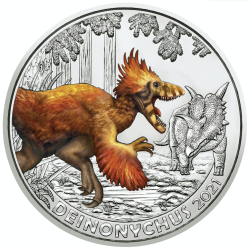 No case (with capsule only)

Size isn’t everything. Deinonychus antirrhopus is a case in point. The seventh supersaur in the superlative series may only have been three and a half meters in length, but it was one of the most dangerous and intelligent dinosaurs to have ever walked the earth.

An inhabitant of what is now known as North America, Deinonychus lived some 110 million years ago. When moving nimbly around on two legs, it used its flexible tail to maintain its balance. Studded with numerous blade-like teeth with jagged edges, Deinonychus's jaws very were much those of a carnivore. Despite containing a brain large enough to suggest a highly intelligent animal, its skull was relatively narrow. This enabled Deinonychus to see stereoscopically and to estimate distances precisely - an essential prerequisite for a successful predator. But perhaps the most striking feature of Deinonychus was the large sickle-shaped claws on the second toe of its hind legs. The fossilized tracks of a Deinonychus show that these claws were splayed upwards and did not touch the ground during walking, all the better for fixing its prey to the ground with one leg while tearing it open with the claws on its long front legs.