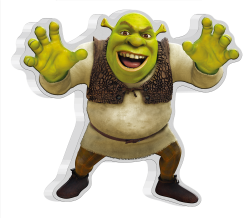 This coin is struck in a unique shape to replicate a detailed portrayal of Shrek - one of the main characters of the Shrek Film franchise. Shrek is grumpy but loveable big-hearted ogre. A reluctant hero who is humble, honorable and brave as well as a loyal good friend who will fight for those who can’t defend themselves. He may be green and gruff on the outside, but he’s an endearing softie on the inside.

The coin’s obverse features the Ian Rank-Broadley effigy of Her Majesty Queen Elizabeth II, the year-date and the monetary denomination.