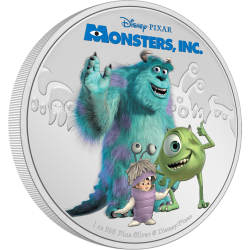 This officially licensed collectible coin celebrates the 20th anniversary of Disney and Pixar’s Monsters, Inc. which premiered on 2 November 2001.

Made from 1oz pure silver, the coin shows a delightful, coloured image of Sulley, Mike, and Boo against a backdrop of engraved monsters! The obverse bears the effigy of Her Majesty Queen Elizabeth II to confirm it as a legal tender coin.

The charming, themed packaging resembles Boo’s closet door and opens to reveal the monster coin inside! The Certificate of Authenticity is also found inside along with the coin’s unique number in the mintage.

The limited worldwide mintage of 2,001 coins reflects the year the film premiered. A charming memento for any fan.