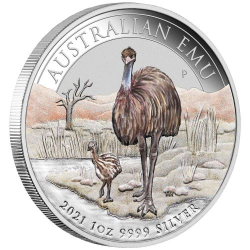 Australian Emu coins celebrate the world’s second largest living bird. Found exclusively in Australia where it has roamed for tens of millions of years, the flightless emu stands up to 1.9 metres tall on powerful legs that can propel it across the continent’s dry plains at speeds up to 50 kmph. Testament to its iconic status, the emu appears in the Australian coat of arms alongside the kangaroo - both said to be incapable of moving backwards.

The coin portrays a meticulously coloured representation of a mother and baby emu by an outback billabong (water hole). Included in the design is The Perth Mint’s ‘P’ mintmark.

Accompanied by a numbered certificate of authenticity, the coin is housed in a classic display case with a clear lid and an illustrated shipper with the Melbourne Money Expo ANDA logo.