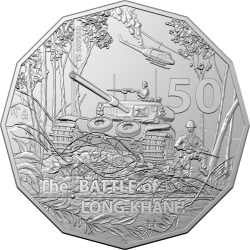 By June 1971 Australia had been involved in the Vietnam War for nine years. With no end in sight to an unpopular war, the Australians – like the Americans – were reducing their forces as they prepared to pull out of Vietnam.

In one of the most intense actions during this period, soldiers of the 3rd Battalion, Royal Australian Regiment, assaulted a concealed bunker complex in South Vietnam’s Long Khanh Province. Three soldiers died in combat, with five wounded.