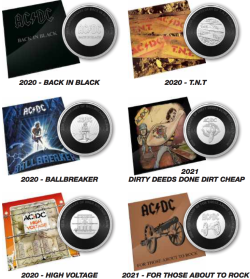 Australian rock royalty AC/DC have kept the world thunderstruck for close to five decades. To celebrate the milestone anniversaries of six of their album releases the Royal Australian Mint is issuing coin tributes to the vinyls that have electrified generations of music lovers. These coins will be highly sought after by rock ‘n’ roll fans and gift buyers alike.

This year marks 45 years since AC/DC released their debut album High Voltage. The band’s second album T.N.T also clocks up its sapphire anniversary at the end of the year along with Dirty Deeds Done Dirt Cheap in 2021.

Meanwhile, 2020 represents 40 years since the release of Back in Black and 25 years since the band released Ballbreaker. Next year it will be the ruby anniversary of the album For Those About to Rock (We Salute You).

• Designs inspired by the original art from album covers - For Those
About to Rock (We Salute You),T.N.T,

• Coin’s obverse features the effigy of Her Majesty Queen Elizabeth ll, as
designed by Jody Clark