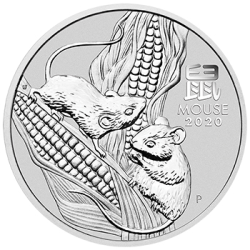 The ancient Chinese lunar cycle resets in 2020, and The Perth Mint is poised to deliver its third Australian Lunar Series bullion coin program, which is destined to uphold the legacy of its predecessors.

Synonymous with premium quality, purity and value, the Australian Lunar Series bullion coin program has established itself as one of the most sought after bullion investment products in global markets. Offering annual interpretations of the 12 animals in the Chinese zodiac, the outstanding precious metal coins honour the history and heritage of the Chinese community in Australia and around the world.

The launch of the Australian Lunar Series III is marked by the release of superb silver bullion coins featuring original artistry celebrating the Year of the Mouse in 2020. The coin’s reverse portrays two mice foraging on husks of corn. Also included in the design is the Chinese character for ‘mouse’, the inscription ‘MOUSE 2020’ and The Perth Mint ‘P’ mintmark.

The obverse of the coin depicts the Jody Clark effigy of Her Majesty Queen Elizabeth II, the weight and fineness and the monetary denomination. No more than 300,000 1oz silver coins will be released.

The reverse includes a security feature in the form of a micro-laser engraved letter. Contained within a stalk of wheat, this letter is only detectable under a magnifying glass.

Each bullion coin is presented in a protective acrylic capsule.