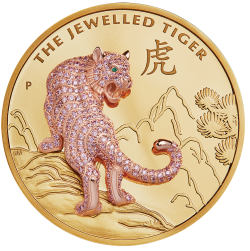 The Perth Mint is delighted to present The Jewelled Tiger, an exceptional collectable showcasing rare and spectacular treasures from two Western Australian icons – Argyle Pink Diamonds and The Perth Mint.

Struck from 10oz of 99.99% pure gold in proof quality, the coin is surmounted by a phenomenal three dimensional representation of one of the most powerful animals in Eastern culture. Handcrafted in 18-carat rose gold, the tiger’s body is pavé set with approximately three carats of specially selected intense to vivid colour Argyle pink diamonds. Two additional emeralds from Colombia’s legendary Muzo Mines feature as the tiger’s eyes.

Native to China’s mountainous regions, the tiger is considered a lucky animal and has been held in awe for centuries. Believed to ward off evil, it is a symbol of bravery, power, strength and ambition. The pattern on the forehead of a tiger is very similar to the Chinese character for ‘king’ hence it has become known as the ruler of all beasts and king of the mountains.

Each coin is issued as Australian legal tender under the Australian Currency Act 1965.

The Perth Mint will release only eight of these rare and collectable coins on a mint-to-order basis.

The tiger is depicted on the reverse of the coin ascending a rocky outcrop with stylised mountains and foliage in a Literati style background. The tiger’s mouth is open in a display of dominance. Also included in the design is the Chinese character for ‘tiger’, the inscription ‘JEWELLED TIGER’ and The Perth Mint’s traditional ‘P’ mintmark.

The Jody Clark effigy of Her Majesty Queen Elizabeth II, the 2020 year-date, the weight and purity, and the monetary denomination are shown on each coin’s obverse.

The Jewelled Tiger is presented in prestigious packaging including a hardy carry case which opens to reveal a magnificent luxury display case, in which the coin is housed.

The coin sits within a perspex panel that rotates 360 degrees and is illuminated by a row of lights to maximise the effect of the glittering diamonds.

The doors of the display case feature two 18-carat gold plates with an Argyle pink diamond on each side. The case also features an individually numbered 18-carat rose gold plaque, which corresponds to the Certificate of Authenticity.