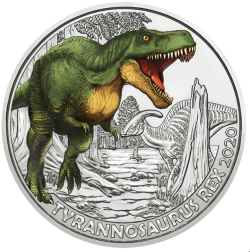 It may have been extinct for some 66 million years, yet Tyrannosaurus rex is by far the best known and most recognisable of all the dinosaurs. This could be due to the large number of tyrannosaurs fossils – among them several almost complete skeletons – discovered over the years, mostly in western North America. But it may also be because the T-Rex, as it is known colloquially, was one of the most terrifying animals to have ever walked the earth. It features in all its fearsome glory on the fifth coin in the Supersaurs series.

Around 12 metres long, 5 metres tall and weighing more than 7 tons, the T-Rex was one of the largest purely land-based predators of all time. Up to 1.5 metres in length and sitting on a short s-shaped neck, the T-Rex’s massive skull contained large cavities that reduced its weight and served as an attachment point for muscles. The large, heavy tail served as a counterbalance to the immense weight of the dinosaur’s upper body, on which there were surprisingly short forelimbs no longer than those of an adult human. Their purpose is still the subject of debate, but it is possible that they were used to tear up prey or to aid the T-Rex to stand upright from the prone position.

The T-Rex’s most striking feature was, however, its teeth. Up to 30 centimetres in length, each one was deeply embedded in the animal’s massive jaw and bent backwards. They were strengthened by ridges and had serrated edges like saw blades, making them ideally suited to tearing up flesh and breaking up bones. The T-Rex could tear off 250 kilograms of its prey’s flesh with one single bite and had the most powerful bite force of any carnivorous dinosaur.

The coin’s glow-in-the-dark obverse features a colour-printed T-Rex aggressively baring its teeth in front of a Parasaurolophus, which is seen in the background to the right. The coin’s reverse features all 12 prehistoric animals in the Supersaurs series in silhouette on its obverse. All of the 3 euro coins in the series are legal tender in Austria.