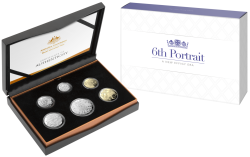 This 2020 Proof Six-Coin Year Set heralds the formal launch of the newest effigy of Her Majesty Queen Elizabeth II on all Australian coins produced by the Royal Australian Mint. The effigy, which is the sixth portrait of the Queen featured on Australia’s coins since her 1953 Coronation, is adapted from a design by Jody Clark. This set, representing a new era in Australian numismatics, will be treasured by coins collectors and numismatists.