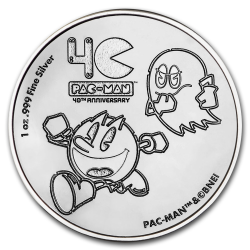 Will ship from early January

PAC-MAN™ is an arcade video game originally released in 1980 by BANDAI NAMCO Entertainment Inc. (previously Namco). Once it was officially introduced in the U.S. in October 1980, it gained popularity far higher than in Japan, called “PAC-MAN™ fever.” It spawned a wide merchandising program with more than 400 items and a T.V. series with high ratings (56% of share) in the U.S., which resulted in receiving the “most successful coin-operated game machine” award from the Guinness World Records in June 2005. With new console and mobile games launching every year, its popularity has crossed the globe for over 40 years.