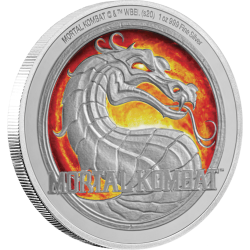 This limited edition 1oz silver coin celebrates the 1992 video game, Mortal Kombat, widely recognised as one of the most popular video games of the ‘90s.

This precious collectible embodies the striking game logo. The words ‘Mortal Kombat’ and the mythical dragon are engraved against the fiery red and yellow coloured background colours that are so synonymous with the game. The obverse of the coin features the Ian Rank-Broadley effigy of Her Majesty Queen Elizabeth II.

The coin is housed inside a specially designed Mortal Kombat-themed box which replicates an arcade cabinet! It includes colourful images on the sides of three characters from the original game: Scorpion, Raiden and Sub-Zero. Confirmation of the coin’s authenticity is printed on its base. Lifting the “cabinet” off the base reveals the coin inside cushioned in black velvet.

Officially licensed by Warner Brothers, there are only 2,020 available worldwide to reflect the year of issue. The perfect memento those who grew up playing Mortal Kombat or indeed any gaming enthusiasts!