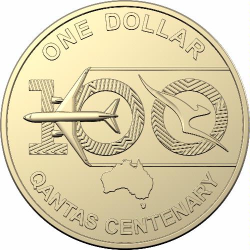 Since its foundation in 1920, the story of Qantas has been linked with the history and identity of Australian aviation. With these 2020 $1 AlBr Circulating Rolled Coins we commemorate the 2020 centenary of Qantas, Australia’s own pioneering airline.

Reverse design design depicts a stylised Dreamliner flying through the number 100, with  lines in its wake to signify movement, progression and the airline’s journey through a  century of history.

These rolls have been released by the Royal Australian Mint.